Yankees minor leaguer Stephen Ridings already has something in common with Cubs closer Craig Kimbrel, beyond a fastball that’s been recorded at over 100 mph.

Pitching for the Triple-A Scranton/Wilkes-Barre RailRiders on Wednesday night, Ridings got the final three outs of a combined no-hitter against Rochester, finishing the work of starter Luis Gil and setup person Reggie McClain. It was a moment to celebrate. Right? Let’s watch the video:

Ridings does not seem to realize what all of the fuss is about. Dude, it’s the first no-hitter for SWB since 2006, which means it’s also the first since the team’s affiliation switched from the Phillies. If only the ballpark offered a clue as to what was happening. 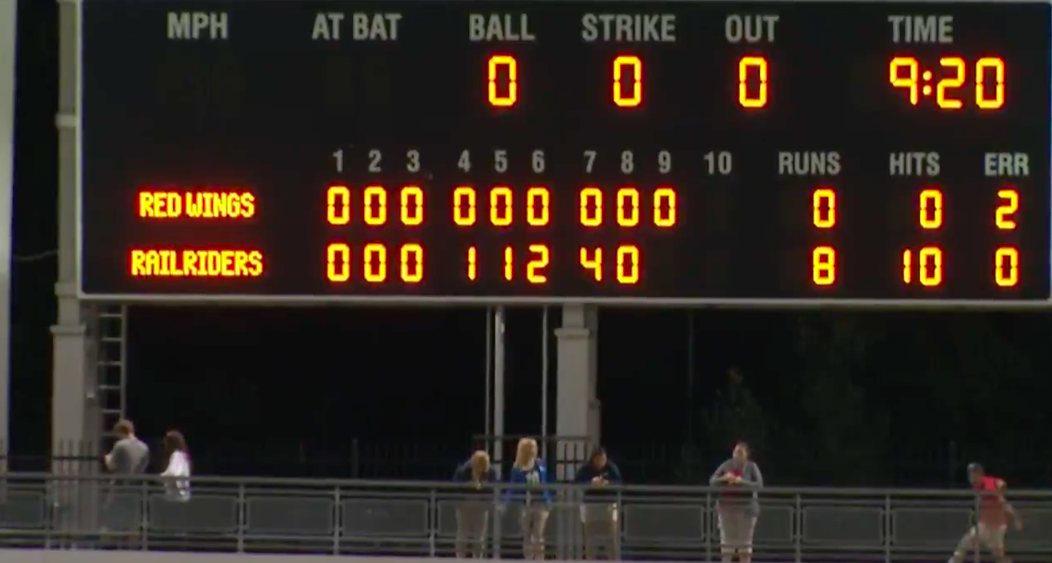 Compare his reaction to that of catcher Donny Sands (not to mention everyone else dousing him with water and all of the jumping up and down). Ridings appears to be caught unaware. Sands definitely was aware, he said in the Times-Tribune:

“I did have a clue what was going on. I guess a lot of the guys didn’t, but I did,” said Sands, who was behind the plate for all nine innings in just his third Triple-A game.

“After you see two outs (in the ninth), you’re just praying that it happens and a ball is hit to somebody.”

Ridings apparently worried about none of that, although the newspaper report does not quote him. His reaction is even funnier when you contrast it to the call on the broadcast, which complimented the emotional control he exercised:

“... the nerves that Stephen Ridings had to feel coming in in the ninth inning.”

Yeah, about that. Later in the sequence, Ridings can be seen saying something that looks like, “I had no idea.”

Ridings did go on the record on Twitter, sending a cryptic quote tweet that said only: “The Birds!” OK! Hitchcock reference? Philadelphia Eagles reference? The uninformed are left to only wonder.

His reaction, such as it was, recalled what happened when the Cubs finished their combined no-no against the Dodgers in late June. Kimbrel acted like he had no idea of the significance and later said as much. Kimbrel appeared to be genuine. If Ridings was trolling, it was an A+ performance from a 6-foot-8 troll. Either way, it might indicate he’s nearly ready for the majors, where blocking out background noise is even more paramount for creating success.

Ridings, who turns 26 in a few weeks, has been a cool customer all season for the Yankees organization, which picked him up in the offseason after the Royals released him. He has a 1.80 ERA with a 36-4 K/BB ratio in 25 innings between Double-A and Scranton. Ridings’ also allowed just 12 hits and one home run.

The Yankees are excited about his potential since he got in better shape and started throwing harder.

His earlier career results in the low minors weren’t nearly as effective, starting in 2017 after he was picked in the eighth round by the Cubs. Most recently with Kansas City in 2019, Ridings posted a 5.91 ERA for Idaho of the Pioneer League. He didn’t pitch in 2020 with the minor leagues shut down because of the COVID-19 pandemic.

The Yankees appear to have found a prospect with tunnel vision.

MIAMI (AP) — Lewis Brinson connected for a first-inning grand slam to back Jesús Luzardo in his Miami debut, and the last-place Marlins beat the NL East-leading New York Mets 6-3 Monday night. Miguel Rojas had two hits and scored twice for the Marlins, who ended a four-game losing streak

YOKOHAMA, Japan (AP) — Yuki Yanagita tied it with an RBI grounder off Scott McGough in the ninth inning, Takuya Kai hit a winning single against Edwin Jackson in the 10th and Japan beat the United States 7-6 Monday night to reach the Olympic semifinals. Japan overcame a 6-5, ninth-inning

SAN FRANCISCO (AP) — Kris Bryant homered in his Giants debut, a two-out solo shot in the third inning, and San Francisco beat the Houston Astros 5-3 on Sunday. Darin Ruf also homered for the Giants. They won two of three in the interleague matchup of division leaders and have