Mike Shildt left behind a significant part of his legacy after the St. Louis Cardinals fired him earlier this month.

It was his former top lieutenant, and the Cardinals' next manager, Oliver Marmol.

Shildt spent 18 years in the Cardinals organization and bears considerable responsibility for the team drafting Marmol as a player, hiring him as a coach in the minor leagues three years later, and preparing him to someday be a manager in the major leagues.

The time came Monday morning, when the Cards introduced Marmol as the franchise's 51st manager. At 35 years old, he is the youngest manager in the major leagues by five years, and the first full-time Latino manager in Cards history. Marmol, who goes by "Oli," grew up in Orlando, Fla. and has spent his entire professional career with the Cardinals.

When the Cards let go of Shildt, team president John Mozeliak mentioned philosophical differences as the reason why they were making a change, but he did not specify what those differences were. It’s unlikely that the Cardinals front office somehow didn't understand Shildt's philosophy anymore, or even that he managed the team differently than they expected. More likely: They realized that Shildt ran the team too conservatively for what they wanted anymore. Watching how much MLB has changed just since Shildt was promoted 3 1/2 seasons ago, the Cards preferred someone who would be more proactive and flexible. And they had somebody on the staff who fit the description — which certainly is a big reason Mozeliak said he hoped that all of Shildt's coaches would stay after Shildt himself had been dismissed.

What do the Cards think they're getting with Marmol? Let's ask Shildt, who explained what Marmol was like as a bench coach in a St. Louis Post-Dispatch story in 2020. In it, Shildt agreed with a characterization calling Marmol "his best man," or somebody with those qualities.

"He’s like the chief of staff... This guy has got a burn, man. This guy has got a strong desire to win. And win. We both want to win our division. We want to win at every turn, in every facet, and so how do you do that as a coach? I think the best way is you prepare and you’re on top of everything. You dot every ‘i’ and you cross every ‘t’ for every player, for every situation, and you’re on point for everything. And you do that, and that's competing. He is a big part of what we do here."

From a fundamental standpoint, Marmol and Shildt seem not all that different philosophically. But there's more (or less) to it, starting with Marmol's age. He's 18 years younger than Shildt — a Millennial rather than a Gen-X’er and, with that, Marmol perhaps has a greater inclination to apply what advanced analytics can bring to a team's preparation and execution on a daily basis.

On that note, this is what Marmol said in the P-D about using data:

"This game is moving really quickly. One way to think about it is: You can rely on your talent, or you can develop it, and I think there is an edge there because many people just rely on what they know and continue to teach (only) that. Then there are the people who want to keep pushing, pushing the boundaries of what is out there. I lean more toward that."

Marmol said at his media video conference that it’s not so much how he’ll manage differently from Shildt, but instead how the Cardinals build on the success that Shildt helped to create. The Cardinals made the playoffs in each of the past three seasons, including 2021 when they ripped off 17 straight victories in September and reached the NL Wild Card Game. It came as a shock when the Cards fired Shildt after having what many teams would call a successful season. But the Cardinals could have been better. 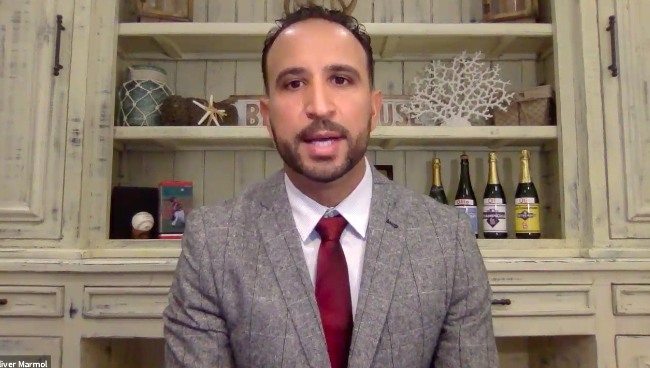 As for moving quickly, the Cardinals likely see Marmol as someone they surely would lose to another team — maybe even this offseason — if they didn't promote him.

Despite his relative youth, Marmol has acquired a lot of experience at different levels of the St. Louis organization. It started when Shildt scouted Marmol, and the Cards drafted him in the sixth round in 2007 — two picks before the Red Sox took Anthony Rizzo. Marmol hit .203 with five home runs in 903 career plate appearances over four seasons, but by his final season in the High-A Florida State League, Marmol realized he was absorbing information more like a coach than a player. The epiphany came during a Spring Training talk from Tony La Russa. Not long after the Cardinals released him, they hired Marmol back as a minor league coach. Two years later, still in his late 20s, he was managing. After five seasons of managing, in 2017, he joined Mike Matheny's staff as the first base coach, promoted simultaneously with Shildt. Two years later, after Shildt was named the new manager, he named Marmol his bench coach.

That spring, the Cardinals produced a short video to help fans get to know Marmol better as Shildt’s right-hand man. Barely 10 seconds into it, Marmol referred to Shildt as his biggest professional influence.

A profile of Oli Marmol the Cardinals produced soon after Mike Shildt named him bench coach in 2019: https://t.co/YXbmPeVODm

"He's the one that suggested drafting me when he was in the scouting department, he was my first hitting coach as a (professional), and I came through the system learning from him how to be a good manager," Marmol said.

Marmol brings more than his youth, a deeper interest in integrating analytics, and other qualities that Shildt and others in the Cards organization nurtured in him. Being the team's first permanent Latino manager, and first since Mike González had the job on an interim basis in 1940, is no small consideration.

González, a native of Cuba who is considered a patriarch of organized baseball in his home country, also had a 17-year MLB career as a player until 1932. Soon after, he became a coach in the Cards' "Gashouse Gang" era, hired by Branch Rickey, who later brought Jackie Robinson to the majors with the Brooklyn Dodgers, breaking MLB's modern color line for players.

While it was only temporary, González was the first Latino manager in MLB history. It's a part of their history the Cardinals probably would emphasize more if it hadn't taken more than 80 years for them to hire a second Latino manager.

No matter, Marmol looking different than virtually every other Cardinals manager in history, along with having the ability to speak Spanish fluently when MLB has so many native Spanish speakers in the playing ranks, are huge assets for the team and the league.

When the Cardinals start play next spring (unless there's a lockout or strike), we are going to see just how intuitive Shildt was in judging and preparing the person who would take over in the Busch Stadium home dugout after he left.

ST. LOUIS (AP) — Dakota Hudson and a quartet of relievers combined to help the St. Louis Cardinals stop San Francisco's six-game winning streak, blanking the Giants 4-0 on Saturday. The Cardinals pitched their sixth shutout of the season. The Los Angeles Angels began the day with a major league-leading

After Yadier Molina walks into the sunset at the end of this season, Andrew Knizner and Ivan Herrera are widely expected to form the St. Louis Cardinals' catching duo of the future. With the way Pedro Pages has performed this season, though, the Double-A catcher is also starting to look

KANSAS CITY, Mo. — Earlier this month after a victory against the Kansas City Royals, right-hander Adam Wainwright told a story about a night off the St. Louis Cardinals recently enjoyed. Wainwright invited some teammates over to his house, including sluggers Paul Goldschmidt and Nolan Arenado, and they put a

Terry Francona is on crutches for the next two months, which makes him miserable. He had surgery on his left foot a little over two weeks ago, to ameliorate the effects of a staph infection he contracted in his left big toe last year, and it was so swollen after
Read more