May the 4th blues: Kershaw lasts one inning in shortest career outing

Los Angeles Dodgers starting pitcher Clayton Kershaw throws the ball against the Chicago Cubs during the first inning of the first baseball game of a doubleheader Tuesday, May, 4, 2021, in Chicago. (AP Photo/David Banks)

May the 4th be with someone else, as far as Los Angeles Dodgers left-hander Clayton Kershaw is concerned.

Sometimes you use The Force, and sometimes The Force uses you.

Kershaw did not say anything about being injured, feeling uncomfortable or Jedi mind tricks the Cubs might have pulled in the postgame video news conference. Nor did he dish on what he and manager Dave Roberts discussed in the dugout after the bottom of the first when he was removed. 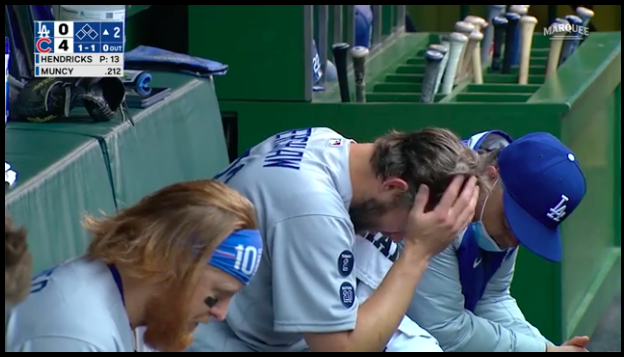 Just looks like he had a bad day. They happen, even to the preeminent left-hander in Major League Baseball. They’re just usually not so short.

Kershaw allowed four runs, four hits, two walks and a wild pitch to go with two strikeouts over his inning. He got three outs on 39 pitches.

Kershaw’s previous shortest outing, based on innings, came on the same date in 2010 when he allowed seven earned runs in 1 ⅓ innings against the Brewers. Kershaw bounced back after that to have a great decade-plus.

On Tuesday, Kershaw’s first 12 pitches went for strikes, but he still trailed by a run after an RBI single by Anthony Rizzo. The next batter, Javier Baez, drew a walk in an eight pitch at-bat, a particularly ominous moment given Baez came in having drawn one base on balls all season. The Cubs scored again and Kershaw got the Cubs 8-9 batters out to end the inning and his day.

On the other side, Kyle Hendricks set down the Dodgers easily, allowing a run over seven innings. Cosmetically, the performances were reminiscent of Game 6 of the 2016 NLCS, which the Cubs won to reach the World Series. The stakes Tuesday weren’t so high, but Kershaw’s short outing definitely put the Dodgers in a bigger bind with their rotations, considering their recent injuries.

LOS ANGELES (AP) — Trevor Bauer and the Los Angeles Dodgers are in a lot better spirits compared to six days ago. Bauer — who expressed his frustration after the defending World Series champions dropped their fifth straight series last weekend — threw seven shutout innings and struck out 10

LOS ANGELES (AP) — Clayton Kershaw went six innings and struck out 11 in a reasonably comfortable win for the Los Angeles Dodgers, and he was thoroughly disappointed in himself. "Wasn't great today," the Dodgers' longtime ace said. "Not a lot of positives. When your team gives you that much

LOS ANGELES (AP) — Although the Padres and the Dodgers know it's only spring, every remarkable thing that happened in their seven games over the past 10 days proved this matchup was far more important than your average April baseball. When a distinctly autumnal chill settled in Chavez Ravine while
Read more