Danny Duffy always liked the idea of being a reliever and pitching from the bullpen. Once he comes off the injured list because of a flexor strain in August, he’s going to get his opportunity — just not with the Royals, who traded him to the Los Angeles Dodgers on Thursday.

Duffy has been a starter for most of his career, but with the Dodgers adding ace Max Scherzer and All-Star shortstop Trea Turner in a trade with Washington on Friday, they don’t really need another starter. Duffy being used as a high-leverage, multi-inning reliever would suit him. Plus, he’d get to partake in all that awesome relief-pitcher discourse out in the pen.

A trade to the Dodgers means another opportunity to win a World Series, something Duffy did with the Royals in 2015 after Kansas City reached the Fall Classic in consecutive seasons. The move also puts him closer to home in California; Duffy went to high school in Lompoc, which is about three hours north of Dodger Stadium. Will he bring the celebratory bear suit out of storage if the Dodgers win the NL West or a title? Maybe that will be a Kansas City thing exclusively. 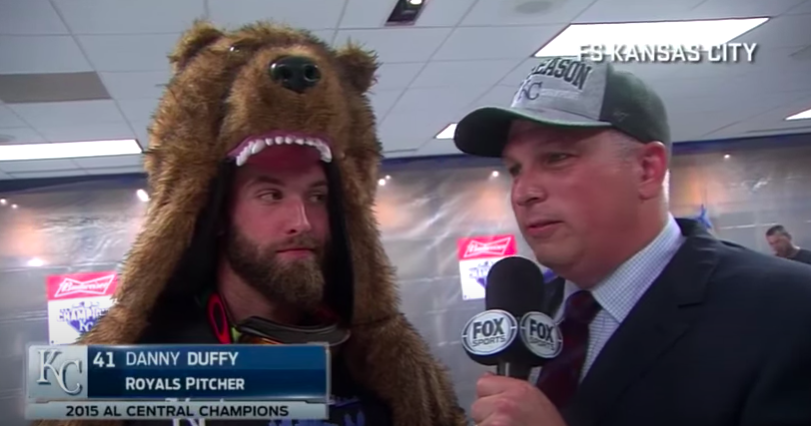 The trade does not preclude Duffy from his request in 2017 to "Bury me a Royal.” General manager Dayton Moore said in a conference call that he was open to Duffy returning someday. Duffy, who turns 33 in December, is a free agent at the end of this season, one of the reasons for the Royals moving him with cash for a prospect to be named later.

“It's obviously something we have to look at,” Moore said. “Of course, we're going to want him back. There's no reason not to think that way. I've probably already said too much.”

Reunions happen. Greg Holland came back. Wade Davis came back. Jarrod Dyson came back. No matter if it happens with Duffy, his impact on Royals history is noteworthy in multiple ways and places.

Shortly after he joined the Padres, fans asked former Royals slugger Eric Hosmer in a Q&A who was the best teammate he ever had. He replied that it was Duffy.

“He was always bringing in stuff for the whole team,” Hosmer said. “He’s the pitcher always on the top step when he’s not pitching.”

Moore was asked about this common sentiment among Duffy’s teammates.

“We challenge our players to be looked upon by others after their careers as being a great teammate,” Moore said. “He was somebody that competed. He was selfless. He cared about winning. He had ups and downs along the way, but he was always accountable for whatever mistakes he made, trying to learn from them, and trying to get better, whether personally or professionally.

“I applaud Danny. He did it well here in Kansas City. He was engaging. We're all proud of who he is, who he has become and who he'll be. Now he gets a chance to spread it elsewhere. That's the beautiful part of baseball.”

Duffy leaving means nobody will wear uniform No. 30 for a while, if again.

Yordano Ventura’s family entrusted Duffy to it before the season. It will return to semi-retirement until, perhaps, Duffy returns to the Royals someday.

There it is. Danny Duffy records his 1,000th career strikeout!

Beyond the ways that are hard to quantify, Duffy also made a significant contribution to Royals history with his individual results. After being drafted in the third round in 2007, Duffy put together one of the best careers in club history.

Here are some notable stats:

Duffy’s best game probably came in 2016, when he struck out 16 over eight innings against the Tampa Bay Rays and barely missed a no-hitter:

Danny Duffy's 16-strikeout game against the Rays in 2016https://t.co/dtus8Z8iRv

“I felt like I had another six innings,” Duffy said. “It was just one of those nights. I cut loose with my first fastball in the bullpen and I was like: ‘Oh, this is gonna be a good night.’ I felt very strong. I think I threw 110 pitches that day and I was trying to go back out, but I think Ned made the right decision. Kelvin Herrera always jokes with me: ‘Hey, Papi, between us we had 17 strikeouts.’ I had plenty left in the tank, to answer your question.”

Duffy’s other greatest miss was probably being limited by a hairline rib fracture in the 2014 postseason. When Duffy got off to a strong start this season, Moore in reminiscing said Duffy’s injury in '14 might have cost the Royals another World Series title.

How much does Dayton Moore believe in Danny Duffy? "I still believe to this day, if he hadn't had that hairline fracture of his rib in 2014, I believe we would've won the World Series in '14 as well."#TogetherRoyal pic.twitter.com/gs7xVBApSt

“Danny is very easy to root for and believe in,” Moore said.

For now, his career continues with another team. But no matter where he is, Duffy will be remembered fondly by colleagues, teammates and fans like few other Royals in history.

KANSAS CITY, Mo. (AP) — Salvador Perez tied Johnny Bench’s record for homers in a season by a catcher with his 45th, but Chad Pinder’s two-run single spurred a third-inning rally and the Oakland Athletics held off the Kansas City Royals 7-2 Thursday. Perez hit a two-run homer in the

The Kansas City Royals placed relief pitcher Joel Payamps on the 10-day IL and recalled reliever Scott Blewett from Triple-A on Saturday. Payamps was acquired by the Royals earlier this season on July 22 from the Toronto Blue Jays. The 27-year-old righty has appeared in nine games, posting a 4.66

KANSAS CITY, Mo. (AP) — In retrospect, the Chicago White Sox probably should have walked Salvador Perez with first base open in the first inning of a scoreless game Sunday, even if it would have gone against just about every traditional baseball strategy. Instead of loading the bags, though, they

The Kansas City Royals dipped into the high school ranks for their first pick of the 2021 MLB Draft, selecting left-handed pitcher Frank Mozzicato from East Catholic High School in Connecticut. Mozzicato, 18, is the first prep pitcher selected by the Royals in the first round since they picked right-handers
Read more