It was 30 years ago Wednesday that Kent Hrbek of the Twins and Ron Gant of the Braves came together at the first-base bag for the most contentious play of perhaps the most fondly remembered World Series of all time.

The '91 Series included several legendary moments, notably Kirby Puckett's incredible catch at the fence and, later in Game 6, his game-ending home run (along with Jack Buck's call: "And we'll see you tomorrow night!"). Not to mention nearly the entire Game 7 duel between future Hall of Famers Jack Morris and John Smotlz. And Gene Larkin's sac fly that brought home Dan Gladden, whose run broke a scoreless tie in the bottom of the 10th to end the Series.

No less iconic, the Hrbek-Gant play stirred the blood even more. In the third inning of Game 2, Hrbek and Gant tangled at first base before Gant's right foot came off the bag after he tried getting back while standing up. Umpire Drew Coble called Gant out, even if it looked — plainly, to most dispassionate observers — like Hrbek had lifted Gant's leg off the base. The call ended a rally for the Braves, who also lost the game and the Series in seven.

Heads Up: Conversations like this can be intense. pic.twitter.com/y1FsYBhBkU

Media made a big deal at the time about how Hrbek was a pro-wrestling fan, and that his tag was something like what a WWE character might pull when the ref couldn't see. So it came at little surprise that CBS, the network broadcasting the ‘91 Series, found an actual WWE star to comment on the record about Hrbek's offensive-looking defense.

"From what I saw, Kent Hrbek mastered the technique of the step-over toe-hold," said champion Randy "Macho Man" Savage, an ex-ballplayer himself in the Cardinals system when he was named Randy Poffo. "The Macho Man is impressed; to the Macho Man's eyes, the tag was clean! And Gant was out."

But what did Miss Elizabeth think?

In a not-so-make-believe turn, Hrbek also received so many death threats that, once the Series moved to Atlanta for the middle three games, he left the team hotel only to get to Fulton County Stadium to play. So that was no fun.

It was a frustrating Series for Gant who, despite the call going against him, blames himself for not sliding into the bag. He also missed other opportunities to drive in runs later in Game 2. And in Game 6, it was his drive to the plexiglass fence in the Metrodome that Puckett leaped to catch.

Neither of the players wanted to comment to Bally Sports for a 30th anniversary story, but both have been on the record enough, and recently enough, that it's no trouble to take a look back anyway.

After taking care of the Toronto Blue Jays in five games in the ALCS to reach the World Series for the second time in four seasons, the Twins won Game 1 against the Braves 5-2 behind Morris. He didn't have his best stuff like he would in Game 7, walking four and striking out three, but he allowed two runs over seven innings. Hrbek hit a home run and Gant had three hits and drove in a pair.

The Braves had been MLB's big story over the summer, reversing nearly a decade of disappointment by winning 94 games and the NL West. They followed up by beating Barry Bonds and the Pirates in seven games in the NLCS, a series in which three games ended with 1-0 scores, and another ended 3-2 in 10 innings. (No, this wasn't the NLCS with Sid Bream's slide; that was '92.)

In Game 2 of the Series, the Twins jumped to a quick 2-0 lead in the first inning on a two-run homer by Chili Davis off left-hander Tom Glavine. The Braves had climbed within a run when they rallied in the third. With two outs, Gant lined a single to left on a hit-and-run against right-hander Kevin Tapani. Lonnie Smith raced for third as the throw from Gladden came wide of the bag. Backing up smartly, Tapani handled the throw and relayed to Hrbek at first after Gant's wide turn. Gant got back to the base in time without sliding, but he came off the bag — one way or another — and was called out. David Justice never got a chance to hit with two runners on.

What actually happened to Gant depends on your opinion.

Hrbek has never denied that it looked like he picked up Gant's leg but, he also says, that's not what happened. When reporters interviewed him the night of the play, a smiling Hrbek said:

“I didn’t get away with anything. I just kept my glove on his leg, and his leg came off the base.”

Would he admit to pulling Gant off the base if he had?

“Sure, I would admit it,” Hrbek said.

Note what it says on MLB’s YouTube page of the play:

Hrbek, now 61 years old, has said that people bring up the play all the time. He half-jokingly, or 1-percent jokingly, accuses them of bias — being Braves fans, or Gant relatives.

“I can explain to you what happened but you won't listen to me anyway,” Hrbek said.

And his story has not changed in 30 years.

Cleary a great play by Tapani to get the ball to me on that play. Gant over ran the bag and I kept the tag on him. Some people see it different. Fire away folks!!!

At the time, Gant and Braves first-base coach Pat Corrales couldn't believe Coble's call. Gant said he "could feel" Hrbek lift his leg. Corrales noted that, while Coble showed certainty about the call at the time — and after the game to reporters — the umpire expressed what seemed like doubt in between during a brief conversation on the field.

Gant maintained he got more than a common tag from Hrbek:

"I was clearly on the base. Everyone knew it. I don’t know since when you can start pulling guys off the base like that. The officiating here has got to be better than that."

The Braves tied the score in the fifth but Gant missed other chances to do damage with runners on base. The Twins took the lead on a home run by Scott Leuis, who took Glavine deep, in the bottom of the eighth. They won 3-2. When you lose a seven-game Series, one play could have turned around everything. The results colored Gant's feelings about the Hrbek play, then and later.

"The umpire got it wrong," Gant said in 2015. “But I still believe it was my fault because I was taught to slide back into any base, and I went back into first standing up. [If] I go back [sliding], then that doesn’t happen.

“But it still doesn’t make it right because we may have won that game."

Coble, on the Close Call Sports podcast in 2019, seemed to doubt that he made the right call.

Watching the replay closely, Gant does switch feet, but before Hrbek applies the tag — something Coble apparently did not realize in real time.

He seems to now. Coble continued: “If I had to do it again, having seen the replay, I would call him safe. It’s one of those things: You’ve got to make a split-second call, and I did.”

What would replay think? If MLB used video review like it does today, it’s likely they’d say the play was not reviewable, because that’s how they get out of making a lot of tough divisions. If it were reviewable, it’s also possible to imagine the replay overlords not overturning Coble’s call, despite what looks like Hrbek lifting Gant off the base. There have been too many calls that seemed like obvious decisions that didn’t turn out that way. Conversely: If Coble calls Gant “safe” in the first place, video review doesn’t reverse it, either. Replay: not necessarily a lot of help no matter what.

Gant retired in 2003 after never getting back to the World Series. Today he co-hosts “Good Day Atlanta” on a local Fox TV station. Hrbek remains an avid outdoorsman and local TV pitchman in the Twin Cities. He retired in 1994 never having won a Gold Glove, a likely oversight by the voters. No snark!

The Twins haven’t been back to the World Series since ‘91, but the Braves won it in ‘95 (after Gant had left). They’re currently leading the Dodgers 2-0 in the NLCS.

Gant’s feelings about the Hrbek play weren’t too hard that couldn't help but be amused when the Twins commissioned a bobblehead doll depicting the play for the 20th anniversary in 2011. Collectors can find them on eBay from time to time. 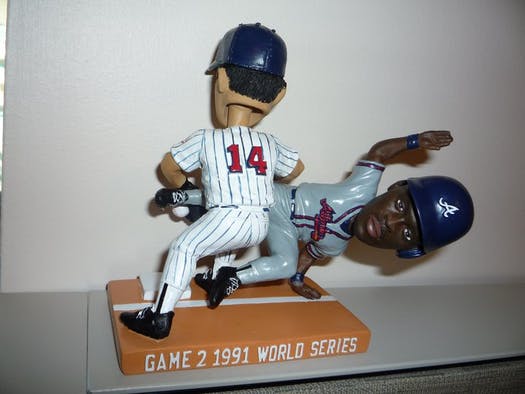 "It's actually pretty neat," he said. "But I hate that they had to make one."

Let’s look at it from the front: 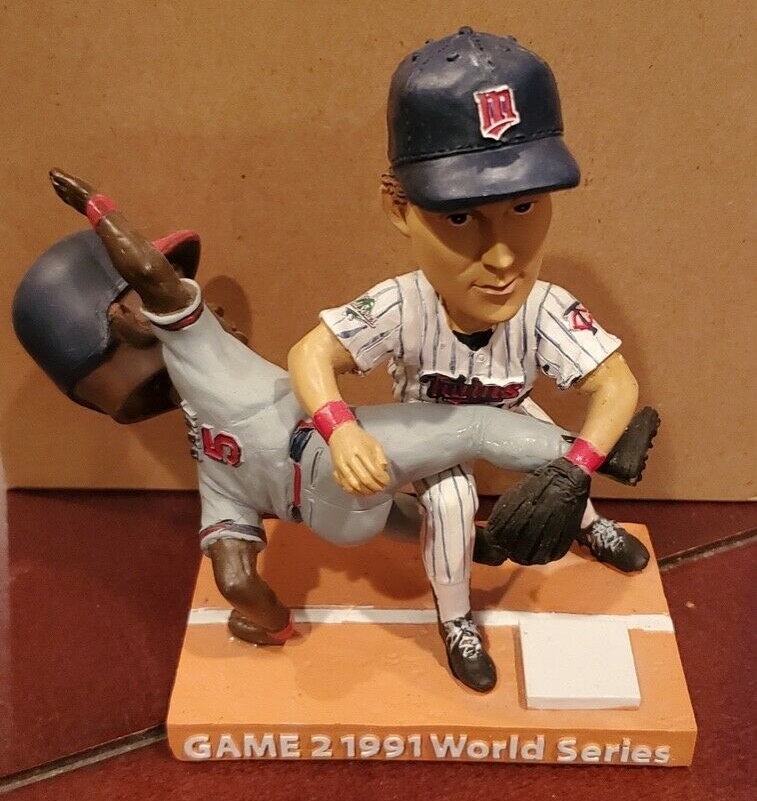 You can tell a Twins partisan made this. Gant’s foot is off the bag (which happened) but Hrbek’s hands aren’t in a “lifting” position (which is not what happened!)

And if Gant had to do it all over again?

"I wish I would've slid into first, rather than standing up going into the bag," he said.

Buck O'Neil never uttered a single word of bitterness or regret about not being elected to the baseball Hall of Fame. Till the end, he urged those who loved and rooted for him to do the same. Now, long after a near miss that left many wondering if he'd ever

ATLANTA (AP) — Baseball's last labor dispute was devastating, but the comeback had two big things working in its favor. Cal Ripken Jr. and steroids. The sport won't be so fortuitous if this lockout lingers into the spring. For the national pastime to maintain some semblance of its former glory,

PHOENIX (AP) — The only hint of activity outside of Chase Field on Thursday afternoon was the low humming noise from a construction crew, which was busy hanging some signs for an upcoming college football bowl game. Otherwise, the home of Major League Baseball's Arizona Diamondbacks was quiet, almost serene.

The Cubs just want Ian Happ and Nico Hoerner to be OK after a scary collision in the outfield Sunday against the Reds.
Read more